The History of Hinges 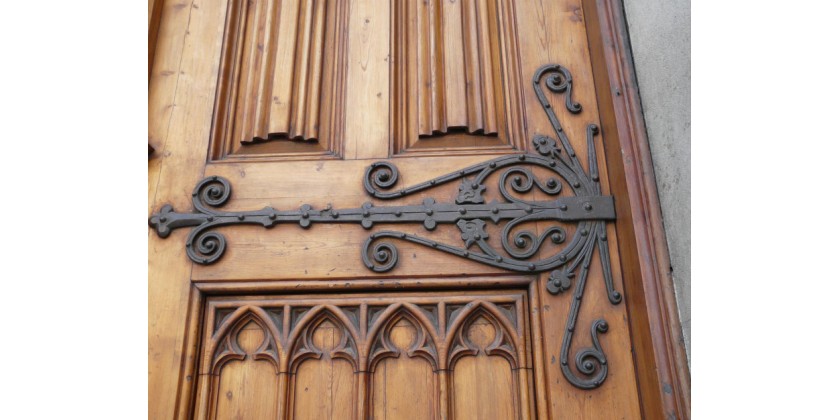 Hinges are a part of our everyday lives, predominantly helping us to open and close doors and windows, but are also present in some form on items such as computers and even jewellery. Have you ever wondered how they came to be such useful items?

Well, in fact, hinges have been dated back as far as the Bronze Age! From evidence discovered, it appears that hinges were first used in order to move heavy objects. In these early days of civilisation, hinges were only used on doors in important buildings such as temples, and often were a symbol of status. The average person would not have hinges on their doors, and would often have to pull heavy rocks across the entrances to their homes in lieu of a hinged door.

Hinges have also been found dating from ancient civilisations such as the Egyptians, Babylonians and Assyrians, again however these were again only very basic hinges used for opening large, otherwise immovable doors.

Due to metalwork being used in more creative ways, and skill in the field of ironmongery being much higher than ever before, hinges became much more commonplace. Even ordinary people, not just the higher classes, were using hinges on their doors.

Along with advanced ironmongery skills came the ability to manipulate the metal in decorative ways, meaning that the large doors in castles and palaces became adorned with beautifully crafted hinges predominantly made from wrought iron, some of which can still be seen today in preserved castles throughout Europe.

The main use for hinges during this time, however, was actually for defence and military purposes. Drawbridges were commonplace on castles for example, with large hinges being used to raise and lower it accordingly. The strength and durability of the hinges in this mechanism were paramount, as the drawbridge needed to withstand not only the weight of goods and troops entering and exiting the city, but also needed to be able to withstand potential enemy attack.

During this period hinges were also used in weapons such as trebuchets, allowing armies to fling large missiles at high velocity towards enemies, as well as in smaller weapons such as crossbows.

As well as being used for military purposes, hinges were also being used at this time in items such as jewellery, chests, gates and shipbuilding as technological advancement continued.

As advancements in steel manufacturing grew exponentially, due to the evolution of steam power during the industrial revolution, hinges became not only more commonplace but a vital part of machinery during this time period.

Production of hinges was becoming faster and cheaper, therefore becoming more affordable. Advancements in the production of the hinges themselves led to far better quality hinges being manufactured and even some innovative hinges being created, for example hinges containing ball bearings for smoother opening.

All throughout the 20th Century up to today, hinges have seen an enormous amount of growth and development. These days hinges are everywhere from windows and doors, to computers and even mobile phones. Some hinges are designed to be invisible, leading to an aesthetically pleasing look, while others are designed for a specific purpose, for example the ability to open both ways.

Hinges are now available to purchase cheaply, in a range of styles, materials and colours. Some are even treated to be weatherproof for outdoor use. With hinges, the possibilities are now endless!

Looking for hinges for a DIY project or repair? Take a look at our range of hinges today! All our products are available with free shipping.